The 133rd edition of Wimbledon Championship has returned once more, and with it, we once again get to see the world’s best tennis players go head to head in hopes to claim the most prestigious title in the sport. As an event with a rich history and prestigious name to it which could turn a nobody to a world-renown tennis player, Wimbledon stats do prove the tournament features only the elite players, where only the best of the best ever get to stand on the top. Looking at the last 51years, the 40 out of 51 winners were ranked among the top 4 in the world. As for the last 19 years, 13 of the last 19 winners were among the top 8 seeds, with only 4 exceptions being Sharapova, Williams, Bartoli, Murguruza and Kerber. Additionally, 17 out of the last 19 winners have reached at least the 3rd round of French Open, with only two exceptions being Venus Williams and Serena Williams.

Ashleigh Barty in one of the strongest quarters in recent years

A quick look at the 1st quarter makes it clear that it is filled with some exceptional players. In fact, we could go even so far to say the 1st quarter looks like one of the strongest/hardest of the last several years. Still, the odds suggest that the #1 in the world Ashleigh Barty is the most likely to walk away as a quarter winner. Holding the no1 spot in the world, quarter-finalist of Australian Open, winner of French Open and Birmingham Classic she surely is among the best in the game, however, when it comes to predicting the winner of the 1st quarter, we have to consider all other talents that will stand in her way. With names such as Donna Vekic, Serena Williams, Carla Suarez Navarro, Angelique Kerber, Garbine Muguruza, Julia Gorges and Belinda Bencic it will take a lot of effort and some luck for Ashleigh Barty to finish at the top.

Can the #1 in the world claim her 1st Wimbledon title?

Sitting in one of the strongest groups in Wimbledon’s history Ashleigh Barty’s road to the top will not be an easy one. Still, her draw looks promising with Muguruza the hardest challenger standing in her way to the 4th round. Would he produce same performances as she did this season, Ashleigh Barty would without a doubt finish at the top of the 1st quarter, however, with names like Sharapova, Pliskova, Tatjana Maria, Riske and even Kanepi that could potentially stop Ashleigh Barty, there are understandably some doubts on how easy her road to the final 8 really is. On the other side, we have got 3 other players, who offer a better opportunity to bet on considering her opponents and her recent performances.

Bertens will fancy her chances with a favorable draw and her toughest opponent Strycova suffering from ankle problems. The other possible opponent Kvitova has wrist problems so in Barten’s case her road to the final stages looks quite promising and with odds of 23.00 on her, she proves to be a good bet. Another strong competitor, Karolina Pliskova will enter Wimbledon in a good form, which she hopes to extend into the upcoming weeks. In Eastbourne, she defeated Bertens in semi-finals with a dominant 6-1 and 6-2 score and will he manage to perform on the same level in Wimbledon, Pliskova could go a long way, which is why we will back her up at 7.00 as we believe she can improve on her 4th round finish here in 2018. Lastly, we have to mention Halep, who has reached quarter-finals here in 2016 and 2017, however, failed to get past the 3rd round in 2018. Nonetheless. Her quarter-finals finish in the French Open does look promising, and considering he could end up facing Osaka in the 4th round, we are confident Halep’s 4-1 record against Naomi Osaka suggests the Romanian will not have a hard time defeating the Japanese for the 5th time in her career. Priced at 17.00, Halep is a good bet to take to win the whole thing, which would be a great result after a disappointing semi-final exit in 2014, where she lost to Eugenie Bouchard. 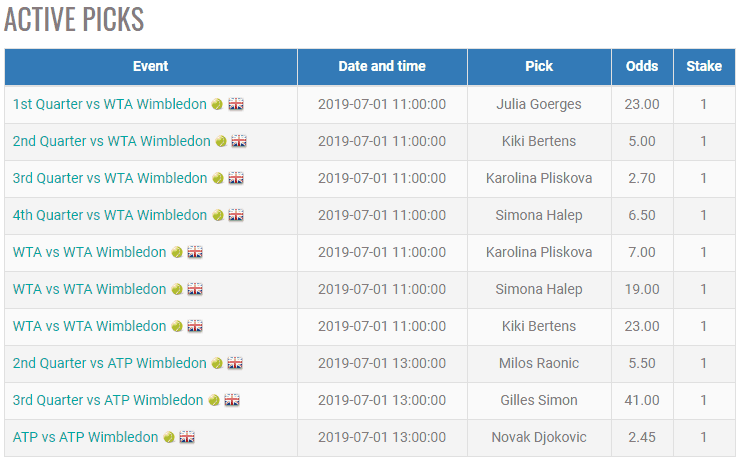 For more Wimbledon betting previews and predictions, visit us at premium.betting-previews.com.

The service will be free for some time and if you want to receive email notifications about new picks, just register on the premium website and you will be notified when we release a new premium pick.