From the most enthusiastic fans of cycling to people who have never even sat on the bike, everyone has heard of Tour de France and this year it will be its 105th edition since its first edition in 1903. Where we will have a chance to see 176 world best riders from across 22 teams competing in this race for the title.

Tour de France (3351km/2082 mi) is an annual male multiple stage bicycle race primarily held in France, although it does pass through nearby countries. Like any other Grand Tour race, it consists of 21 stages which last about 3 weeks. 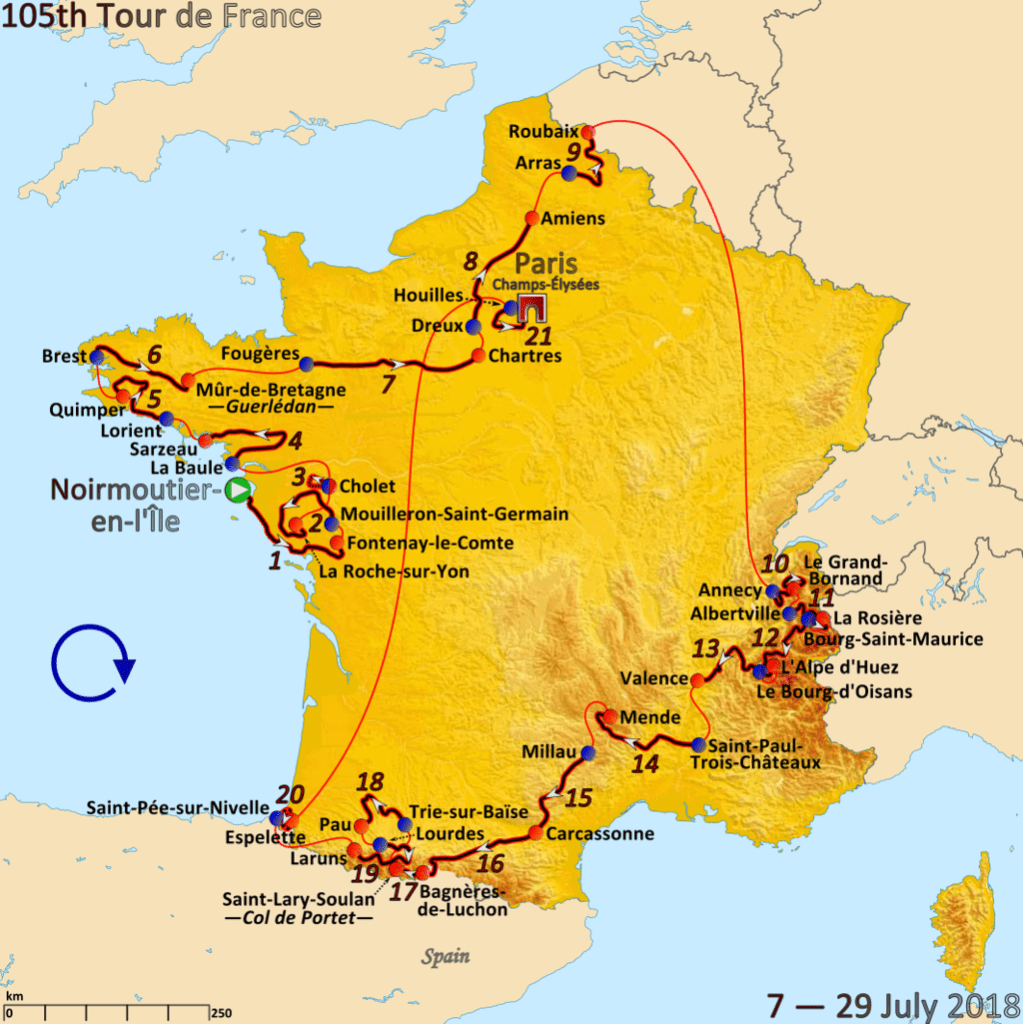 The race itself will start in Noirmoutier-en-l’Île, in the Vendée on 7th of July and will finish in Paris with the Champs-Élysées stage on 29th of July. As an interesting fact, this years race will have some differences compared to other ones. For starters, it will be the shortest race of the century. It will also start a week later due to FIFA World Cup. This year will also be the 5th time a tour will start from Vendée.

18 of the UCI WorldTeams are automatically invited to the race, however, we will also see 4-second tier UCI Professional Continental teams who received a wildcat invitation. The 4 teams are as follows; Cofidis, Direct Energie, Fortuneo-Samsic and Wanty-Groupe Gobert. Each of the 4 teams.

This year we will see a total of 26 mountain climbs or hills and altitude finishes, which is first of HC class. The geographic distribution is as follows:

With 3 consecutive wins, it’s hard to dismiss Chris Froome. However, we can not forget about Vincenzo Nibali, who is considered to be Froome’s top challenger for the overall title. In addition, there are Nairo Quintana, Richie Porte, Tom Dumoulin and Romain Bardet who should not be underestimated as they are more than capable to finish on the top.

Despite Froome’s excellent performances in Tour de France (4 total wins), there is some doubt about him winning this year. Normally he would be considered an undisputed favorite, but Giro di Italia/ Tour de France double has proven to be far from the best combination in recent history. In fact, the last rider who won the two events in the same season was Marco Pantani back in 1998. The only thing that speaks in Froome’s favour here is the 6 week between the two races (instead of 5). If that is true for Froome, same can be said for Dumoulin who has finished 2nd in Giro di Italia.

Looking at Primoz Roglic, he boasts the most impressive 2018 record. The former ski-jumper from Slovenia won Tour de Romandie, Tour of the Basque Country and most recently the Tour of Slovenia. In Tour of Slovenia Roglic finishes almost 2 minutes ahead of second-placed Rigoberto Uran, which is an impressive result, to say the least. He has got the talent, that’s for sure, in addition, he is an outstanding time trialist and climber. Still, I feel like he won’t be finishing 1st, as there are other cyclists much more capable of that.

As mentioned before Nibali is Froome’s biggest competitor this year, well, at least on the paper. His performances made me doubt in his capabilities to win Tour de France. He has won Milan-San Remo but the problem with Nibali is that he has never finished top 10 in multi-day stage races, which Tour de France is. So taking that into the consideration we can somehow “safely” say Nibali won’t be finishing 1st.

When looking at results in the last preparation for Tour de France, we saw Geraint Thomas and Richie Porte winning Critérium du Dauphiné and Tour de Suisse. Out of these two, Richie Porte has proven to be more than ready for his 1st Tour de France title, with his finish in Tour de Suisse with more than a minute ahead of Jakob Fuglsang and Nairo Quintana. Clearly, Porte is in great shape and form and this just might be his year.

We will be probably betting on all 21 races during the Tour de France, so check back later for more betting previews and predictions. You can check our previous result here.